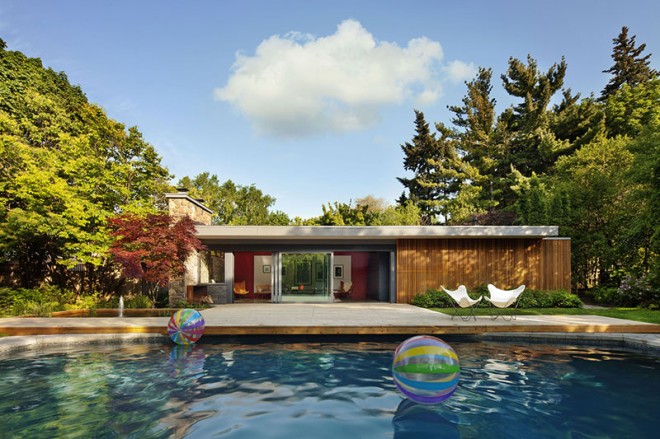 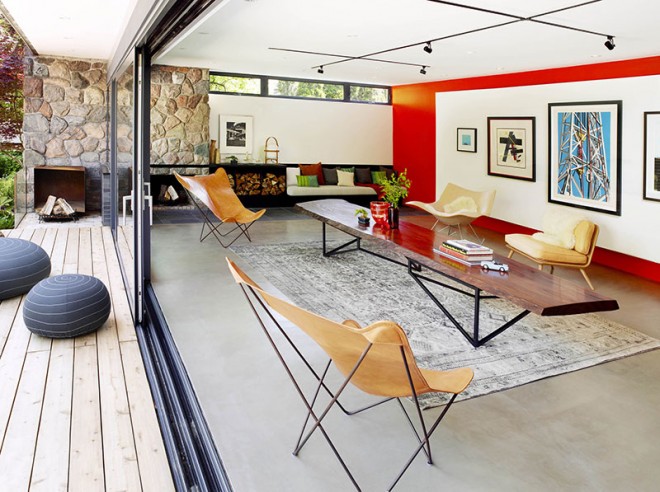 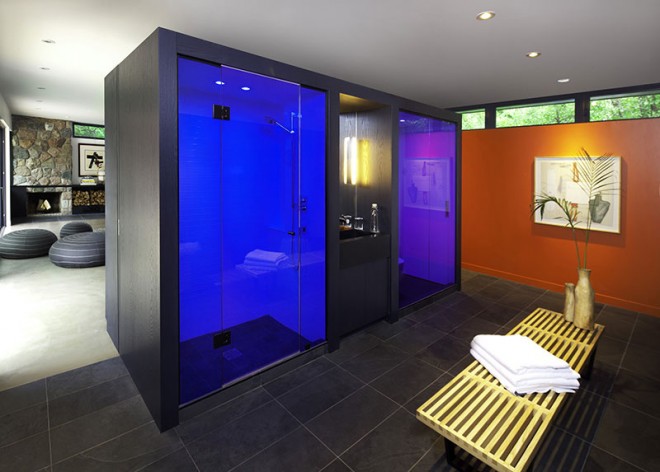 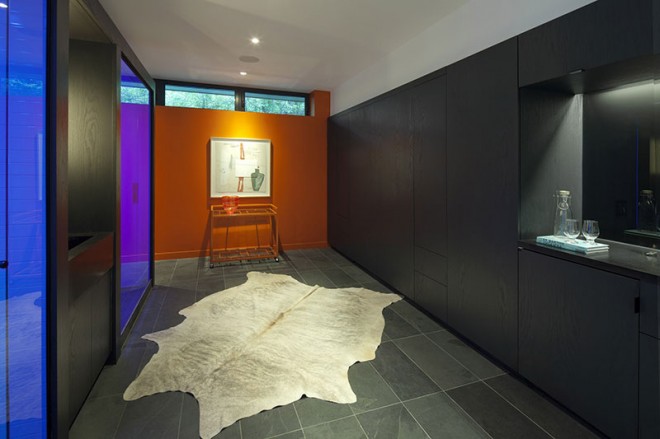 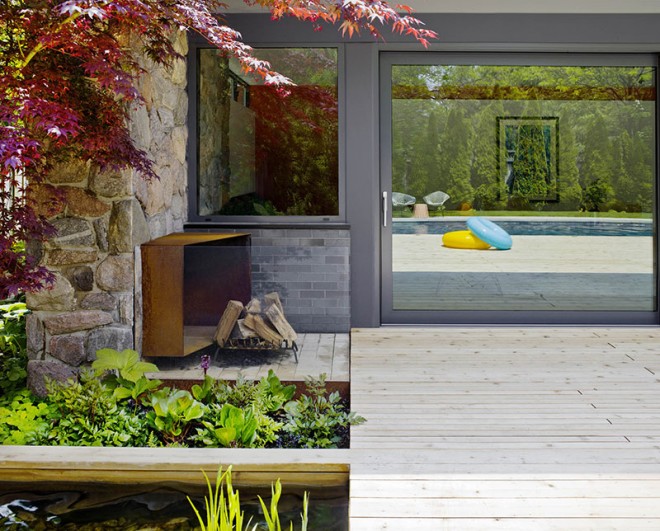 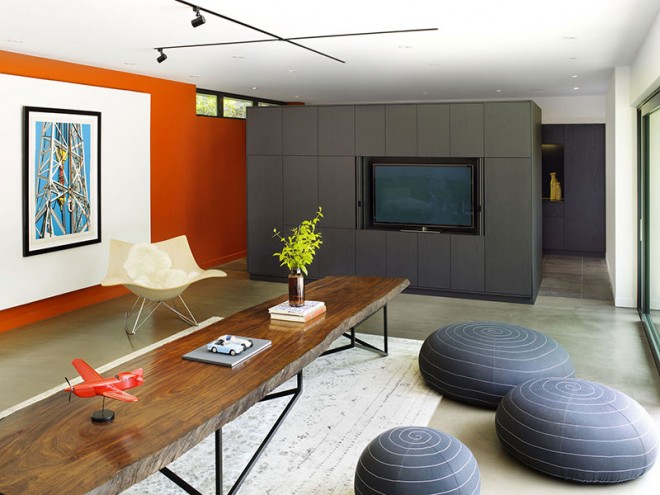 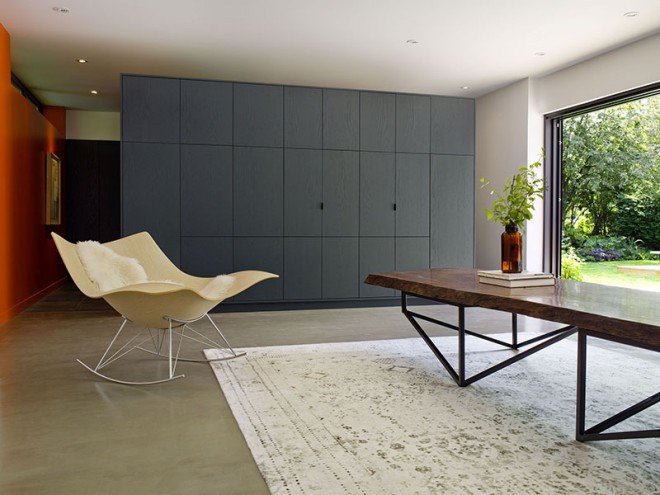 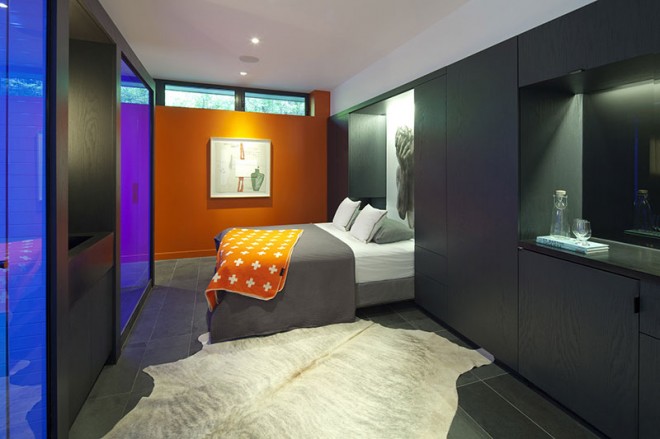 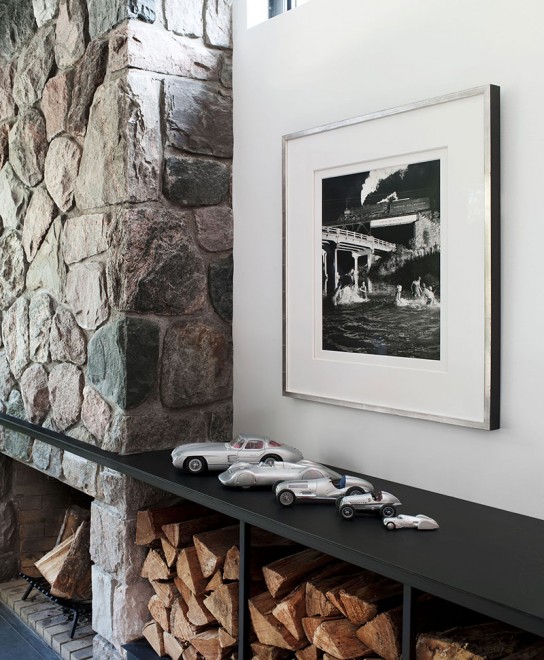 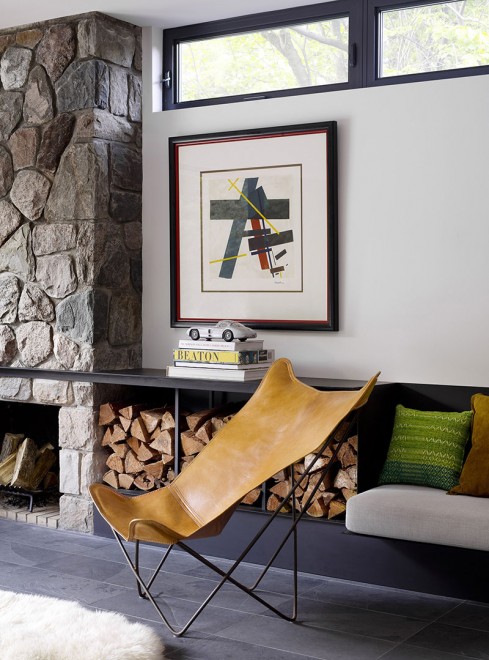 Architects: +tongtong
Location: Toronto, ON, Canada
Area: 1,000 sqft
Year: 2014
Photographs: Colin Faulkner
From the architect. Multidisciplinary studio +tongtong recently completed a bold, minimalist renovation of a pool house in Toronto. Designed to be multifunctional, the open-space interiors can easily transform from pool house to guesthouse to entertainment space to work studio to event space.
Located in the garden of a large traditional house, the 1000 square-foot freestanding pool house is a relic from the mid-century era. But over the years, multiple renovations masked its original design. “Its true potential was really buried under a lot of different interpretations,” says principal John Tong. “I wanted to redefine its modernity while making a place that is warm and full of ease.”To emphasize the pool house’s mid-century modern language, the flat roof was accentuated by bringing the roofline forward, creating a floating brow. Windows were pushed flush to the ceiling to articulate the plane of the roof and offer sunlight while providing privacy for guests. Formerly made of stone, the exterior cladding was relined with lighter and warmer cedar slats. The focal point – the oval pool – was re-imagined without changing its shape through extending the patio parallel to the flatness of the roof. “The whole composition is made up of these new elements layered over top of the existing,” says Tong. “The deck is laid on top of the pool edge; the existing roof was extended to create a new floating shelf.”

Tong’s experience designing luxury guest suites and multifunctional spaces for hotel projects like the W Hotel in New Jersey and the Drake Hotel in Toronto informs his approach to the interior. Moving inside, the environment is designed to act as a pool house for guests changing and showering, as well as a guest suite for extended stays. The open-concept room is punctuated by a large, freestanding monolith that defines the private and public space.
On the public side, the black millwork holds IT and audio visual entertainment equipment. The large table, designed by Tong, is made of exotic wood salvaged from the Panama Canal and features a geometric steel-frame base. The scale of the table, 14’ x 3’ is long and luxurious. The coffee table can be easily raised to counter height by rotating the legs, transforming the space from an intimate family space to a space for larger events such as dinner parties or a work studio. The bright orange feature wall, which transcends both the private and public spaces, is used as a gallery wall for the client’s art collection.
On the other side of the monolith is a shower and toilet, both of which are enclosed with vibrant blue glass. “Like a lot of our work, we try to add playful elements, elements of surprise” says Tong. The opposing wall features a custom Murphy bed with integrated side tables and full support for luggage and storage. A built in microwave, mini-bar and coffee machine are all provided with the vision of giving guests the hotel experience complete with a complimentary munchie box.
While openness and ease of flow is emphasized in the space, some privacy was needed. The toilet has an electronic blackout blind that offers full discretion, while the black monolith separates the private space with magically trackless cantilevering sliding doors. To achieve an even simpler layout, radiant floor heating under polished concrete and slate floor was used. “Like all our projects, the client is our collaborator. The program along with issues of comfort and privacy evolve and were developed together.
Both the outdoor and indoor spaces subtly riffs on its mid-century modern aesthetic, creating an environment that’s simple in its orientation and rich in details and textures. “I think that modern architecture really had that sense of horizon. It was optimistic. The future is positive. This is a space where one can reflect, be creative, celebrate alone or with others, and live with ease.”
Formerly a founding principal of interior design firm 3rd Uncle Design, +tongtong principal John Tong (B. Architecture from the University of Toronto, 1992), is currently working on a diverse range of projects including his continued work with the Drake Hotel on the new Drake Devonshire Inn in Prince Edward County; a restaurant in the Delta Hotel in Waterloo, Ont.; a Spanish concept restaurant in the St. Lawrence Market; several custom residential projects across Canada and the United States; along with the ongoing development offurniture and accessories. +tongtong recently designed a retail store Annie Aime that opened in Toronto this past spring.